U.S. fund managers have far more invested in coal, oil, and gas than companies with green revenue — but a few are bucking the trend

The movement to divest from fossil fuels and re-invest in the clean energy transition has grown exponentially in the past five years. When we created Fossil Free Funds, where every month we examine trillions of dollars in mutual funds looking for investments in fossil fuel companies, we wanted to bring climate transparency to our financial savings. We started by looking for companies on the Carbon Underground 200™ list, a ranking of the largest publicly traded coal and petroleum reserve owners. But moving money out of dirty energy is only one half of the equation. That’s where the Carbon Clean 200 comes in: companies that are leading the way with solutions for the transition to a clean energy economy.

The Clean200™ serves as a parallel to the Carbon Underground 200. As You Sow and Corporate Knights recently released an updated version of the list, which highlights large firms with significant green revenues. The lists features the 200 largest publicly traded companies worldwide ranked by their total clean energy revenues, as rated by Bloomberg New Energy Finance. To qualify, companies must have a market value of at least $1 billion and generate at least 10 percent of their revenues from clean sources.

We decided to see which mutual funds are investing in the Clean200, and which are still betting on the Carbon Underground 200 and other coal, oil, and gas companies. We found that most fund managers are still investing more in fossil fuels than green revenues, but a few leaders in clean energy investment stand out.

Direct Stock Investments by U.S. Open-End Mutual Funds and ETFs in Clean200, Carbon Underground 200, and All Other Coal and Oil/Gas Companies

U.S. mutual funds are more than four times more exposed to coal, oil, and gas industries compared to the Clean200

We analyzed over 5,000 mutual funds and ETFs and found $804 billion directly invested in coal, oil, and gas industry stocks — including $521 billion in the Carbon Underground 200 — compared to $199 billion invested in the Carbon Clean 200. Fund managers seem to prefer fossil fuel investments as opposed to large companies with green revenues.

The 200 companies in the Carbon Underground 200 command $521 billion in direct stock investments from U.S. mutual funds. That’s nearly twice the assets invested in the remaining public companies in the coal, oil, and gas industries — numbering over 2,000 firms, with $284 billion in mutual fund assets. That’s a good indication that the divestment movement’s focus on those 200 offenders is supported by sound economic evidence, as well as environmental impact. 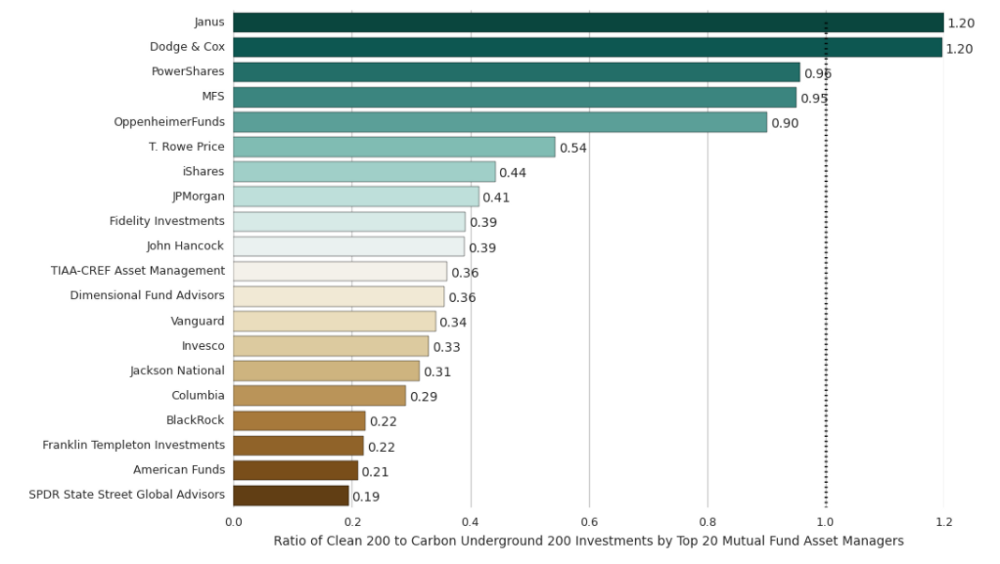 Of the top 20 asset managers, only two had more money invested in the Clean200 than the Carbon Underground 200

SPDR State Street Global Advisors had only 19 cents invested in the Clean200 for every dollar invested in the Carbon Underground 200, a more than five-fold difference in favor of the fossil fuel giants. Blackrock, which recently made headlines with a ‘Darth Vader-style’ threat to oust bosses who ignore climate change, had 22 cents in the Clean200 for every dollar in the Carbon Underground 200.

The Carbon Underground 200 are the top publicly traded owners of carbon reserves that scientists and economists have called “unburnable”, but many fund managers do not seem to be acknowledging any risk that they will get stuck holding stranded fossil fuel assets. Meanwhile, the opportunities of investing in the transition to a low-carbon economy may be being ignored. While the Clean200 is not intended as a stock-pick-list or an index, the fact that large asset managers are so exposed to the largest fossil fuel companies at the expense of the largest green energy companies should be cause for concern.

Want to see the carbon risk and fossil fuel exposure embedded in your portfolio? Head over to Fossil Free Funds where you can see if your savings are invested in dirty energy sources, and find investment options that support a cleaner, greener future. Learn more at fossilfreefunds.org.

We source fund holdings and company industry data from Morningstar. The universe of funds we examined was restricted to equity and balanced portfolios (with at least 40% of assets in direct stock investments) offered as open end mutual funds or ETFs and domiciled in the U.S., numbering over 5,000 and accounting for nearly $11 trillion in AUM at time of publication. The data represents the most recent fund holdings delivered by Morningstar as of March 2017, with over 90% of portfolios dated 2016–12–31 or later. We also used Morningstar company industry classifications in identifying coal, oil, and gas companies beyond the Carbon Underground 200. Learn more at fossilfreefunds.org/how-it-works.

The Clean200: The biggest 200 public companies ranked by green energy revenues, was first published on August 15, 2016 by Corporate Knights and As You Sow. The Clean200 are listed by their estimated green revenues in USD. The dataset is developed by multiplying a company’s most recent year-end revenues by its BNEF New Energy Exposure Rating mid-point. In order to be eligible, a company must have a market capitalization greater than $1 billion (end of Q2 2016) and earn more than 10% of total revenues from New Energy13 sources. The Clean200 uses negative screens. It excludes all oil and gas companies and utilities that generate less than 50% of their power from green sources, as well as the top 100 coal companies measured by reserves, top 100 weapons producers, as well as laggards on tropical deforestation14, and child or forced labor and companies who engage in negative climate lobbying. Learn more at asyousow.org/clean200.

The Carbon Underground 200™, compiled and maintained by Fossil Free Indexes℠, identifies the top 100 coal and the top 100 oil and gas publicly-traded reserve holders globally, ranked by the potential carbon emissions content of their reported reserves. Rankings are constructed using a reserves-based methodology with the underlying core data based on “reported” reserves. Coal reserves are the sum of proven and probable reserves based on the last reported reserves amount by mine. Reserves are allocated to listed companies based on percentage ownership of individual mines. Oil and gas companies are ranked on proven reserves (1P) net of royalty payments. Learn more at fossilfreeindexes.com/divestinvest.

Director of Digital Strategies, As You Sow

The Federal Reserve is already a climate policymaker

The Fed wants to wash its hands of the climate crisis. But through inaction, it's contributing to worsening economic risks

Which Vanguard Fund is More Sustainable, VTSAX or VFTNX?

Vanguard’s VTSAX fund is investing in the climate crisis, but there are sustainable alternatives that avoid climate-related financial risk

Urge asset managers to adopt a No Deforestation policy

401(k) plans are forcing people to invest in fossil fuels

While companies talk up efforts to reduce emissions, their employee retirement plans are heavily invested in coal, oil, and gas

Why is BlackRock’s Carbon Transition fund packed with Big Oil?

Changes to how funds are assigned fossil fuel grades, deforestation grades, and more

Finding the right fossil free fund for you

Searching for top-scoring investments on deforestation, gender equality, and more

Now you can compare fossil free funds to index funds

Join us Wednesday, April 22 to learn about fossil free investing

Healthy forests are an essential part of the global climate solution

There’s a common myth that says moving your money away from increasingly risky fossil fuel investments means having to sacrifice returns. But it’s not true.

BlackRock must invest for the Paris climate agreement

BlackRock has billions invested in companies with business models that are not in alignment with keeping global warming well below 2˚C.

Burning coal for power is a huge problem for climate change. It could be a problem for your 401(k) as well.

Measure the clean energy impact of your savings

Fossil Free Funds is adding Clean200 screening. Now each fund is scored on how it invests in clean energy leaders.

What if your savings could help save the world?